While we're disappointed in the Miami-Dade School Board for voting down a simple resolution to recognize October as LGBTQ History month in Miami-Dade public schools, and to teach 12th-graders about the rights that LGBTQ people have won in two landmark Supreme Court cases, we want to recognize one champion who stood strong for our community.

School Board Member Lucia Baez-Geller introduced the resolution and shepherded it through the process in the face of outrageous, bigoted attacks and hateful rhetoric.

While we're sad that this resolution, which was passed nearly unanimously just a year ago, failed this time, we want to thank Lucia for being a fierce ally and champion for our community.

Please take a moment to sign the thank you card to her below: 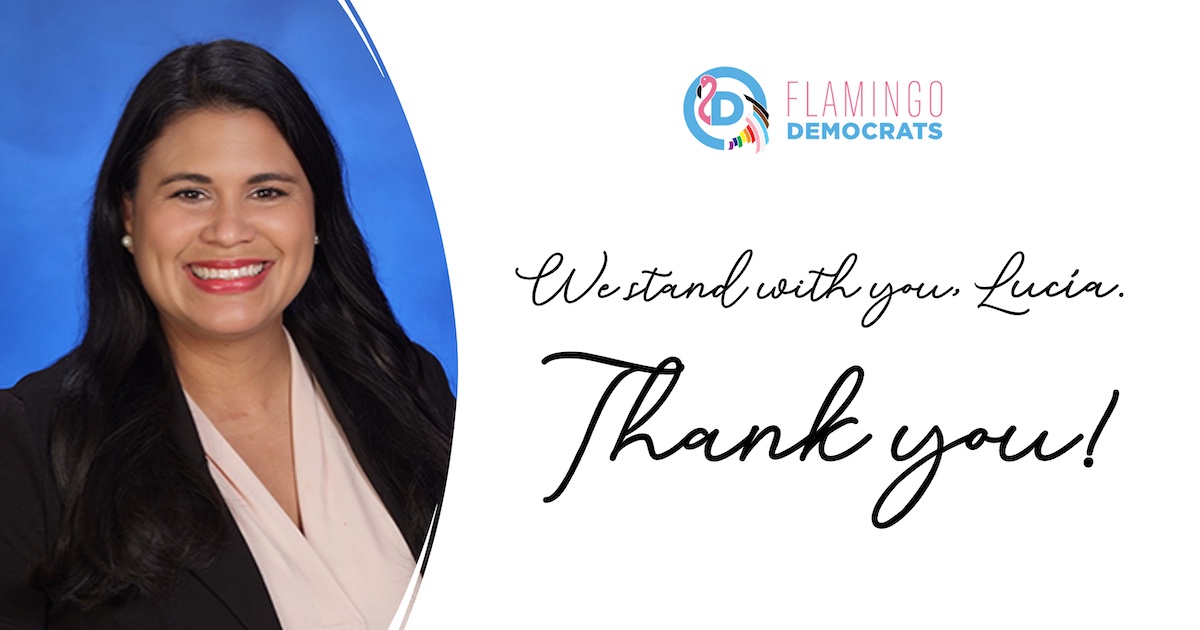 After eight hours of debate and public testimony, the Miami-Dade County School Board voted not to recognize October as LGBTQ History Month.  In stark contrast to the near-unanimous decision in 2021, bigotry, fear, and hateful rhetoric hijacked the debate.  Although September 7, 2022 didn't end the way we'd hoped, we are so thankful for your courage, your compassion, and your leadership.

Despite the School Board's legal counsel determining that H-11 was in compliance with the Parental Rights in Education Law, the harmful "Don't Say LGBT" Law, and employed opt-out measures for parents through district regulations, agitators preached hate disguised as righteousness and lies disguised as liberty.  Through intimidation efforts by groups that included the Proud Boys, individuals poisoned the debate and betrayed not only our community, but our students.  What you tried to do was not only consistent with justice and progress, but it was also what the vast majority of our children wanted for each other.  In fact, this was eloquently confirmed by Andrea S. Pita Mendez, the MDCPS Student Advisor, who said that, "...[the students] are the ones in the classroom with our teachers every day.  For our friends and our classmates, we want this proposal to pass."

Despite the outcome, we still have faith that, "the arc of the moral universe is long, but it bends toward justice".  We still believe that hope can be found, even in the darkest of places, and though takes many forms, yesterday, it was through you.

Most importantly, as a mom, we know that you always put our children first. As an English teacher who mentored our students, we want to leave you with these words from Maya Angelou:

We know that you'll rise -- that we'll rise together -- and believe that despite the outcome, compassion and understanding will win in the end.